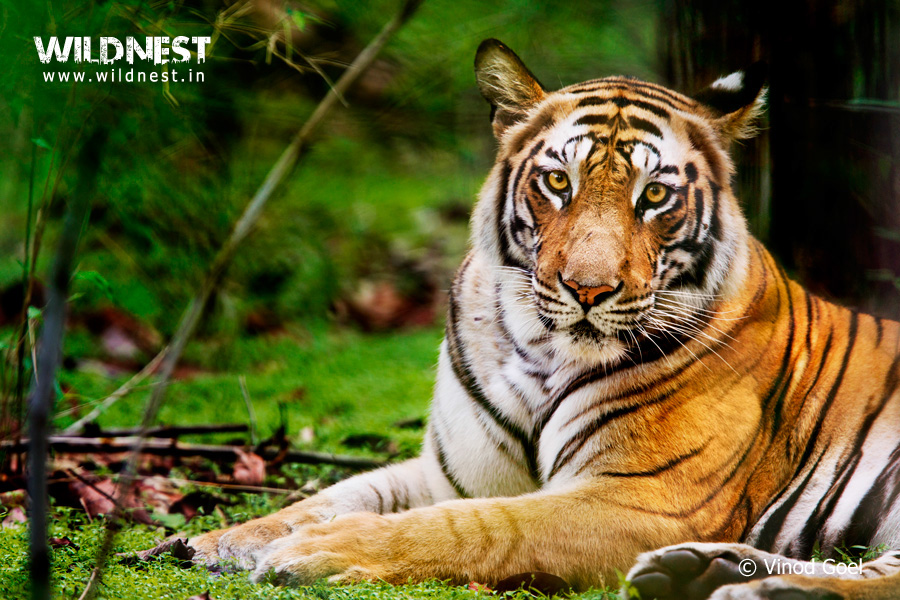 It is blessed with varied landscape encircled by cliffs and wooded Vindhya Mountains, grasslands, densely packed bushes and trees, forts and caves that form the iconic attraction. The beautiful scenarios of this Indian Wildlife Park offer picturesque view to the tourists and nature lovers.

Bandhavgarh National Park derives its name from the most prominent hillock of the area, which was handed over by Hindu Lord Rama to his brother Lakshman. Hence the name, Bandhavgarh (Sanskrit: Brother’s fort).

Apart from various denizens and varied flora of the forest, Bandhavgarh is famous for its rich history.The history of Bandhavgarh National Park can be traced back to the 1st century. There are 39 caves in the Bandhavgarh fort and in the surrounding hillocks up to a radius of about 5 km. Bandhavgarh fort is thought to be more than 2000 years old and there are references to it in the ancient books, the “Narad-PanchRatra” and the ”Shiva Purana”.The fort houses the 10th century rock images of incarnations of Vishnu. A temple at the top of the hill inside the fort is open for public on Ram navmi (a Hindu festival).

It was ruled by various dynasties over a long period of time with Baghels being the last rulers who shifted their capital to Rewa in 1617. Before becoming a national park in 1968, this forest was a game reserve maintained by Maharaja of Rewa and was used as hunting grounds for himself  and his guests. It was constituted in Project Tiger in 1972 and various steps have been taken for its conservation since then.

Summers (April – September):  Summers are hot and humid. During summers the maximum temperature goes up to 45°C in May and June and minimum temperature recorded is 23°C.

Monsoons (July – September): Average rainfall of 1133 mm is recorded and the park is closed during this period.

Winters (November – March) : Winters are pleasant. End of December and January become extremely cold with temperature falling upto 2°C in the month of January. Some rainfall due to the southern cyclones also occurs between the months of November and February.

It is advisable for the tourists to carry heavy woollens  in December and January because the safari vehicles are open. During summers one should carry light clothes preferably full sleeves to protect them from harsh sun.

Some Tigers of Bandhavgarh have acquired names just like human beings. The names were given by naturalists or park authorities from time to time. Some tigers such as Sita, Mohini, Charger, B1, B2, B3 and Challenger have become famous throughout the world and attained a celebrity status. Now their off springs such as Bamera(M), Kankatti(F),Blue eyed(M), Banbahi (F) and Sukhipattiya (F) are the prominent ones here. Before even entering the jungle, conversation with the drivers, guides, local residents of the lodge/hotel and village would give you a feeling that life in Bandhavgarh revolves around tigers.

During October to January migratory birds visits Bandhavgarh. One can view red-headed vultures and other birds along with tigers. There are chances of spotting a tiger in all the zones of Bandhavgarh.

From mid-January to March, weather is quite pleasant. Local birds start appearing as Mahua tree as well as Dhak (Flame of the forest) starts flowering. Animals such as sloth bear, chital, sambar deer also comes to feed on Mahua flowers.

Period from April to June is ideal for tiger sighting. The undergrowth starts vanishing and water resources also get starts drying up. The denizens of the forest are forced to come to active water sources to quench their thirst. One  may be fortunate to get some once in a lifetime sightings nearby water bodies during this time.

Khitauli zone is good for birders as it has water resources such as Bamera dam, Khitauli reservoir.

It is known for having the highest density of tigers among tiger in India. Meadows of Chakradhara and Siddhbaba in Tala Range provide excellent opportunities of tiger sighting.

A tiger earned a name “Charger” because of his aggressive nature towards tourist jeeps and elephants. This tiger gives a thrill and adventure to game drives. Although he showed aggression but never injured and it became a legend of Bandhavgarh and died in September 2000. A memorial has been raised in its memory at “Charger Point”.

Bandhavgarh National Park is well connected from the nearby towns & cities like:

The nearest railway stations for Bandhavgarh National Park are:

The nearest Airport from Bandhavgarh National Park is Jabalpur (200 Kms / 04 Hrs Drive). One can get flights for Jabalpur from major cities of India.