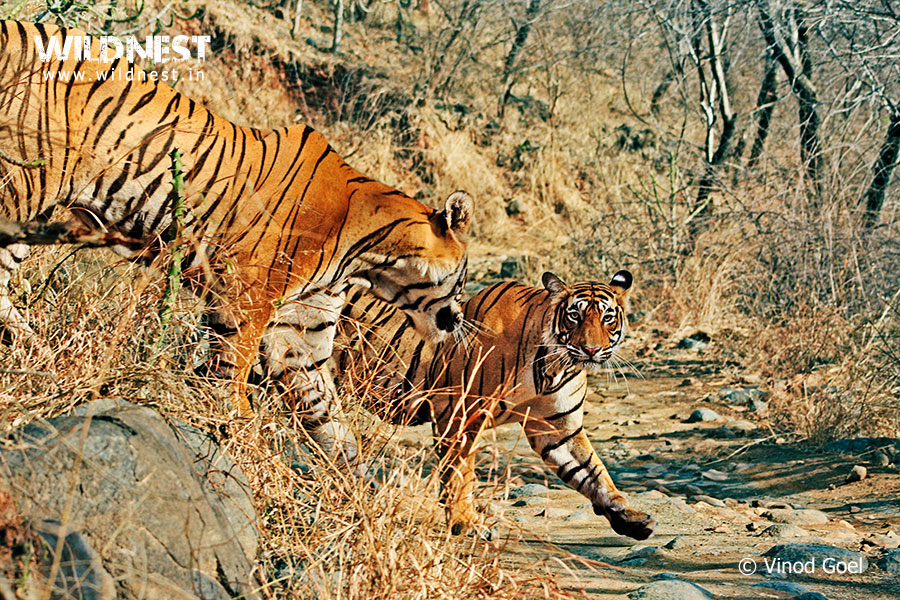 Well, talking about best place to see tigers in India, let me start from the beginning. In the beginning of 20th century there were 40000 tigers in wild in India. By 1973 they got reduced to 1800. It reached to 3640 in 2001-02 and then took a downward trend. In spite of Project Tiger programme launched in 1973 the tiger population was only 1411 in 2006. As per the census released by the Wildlife Institute of India, Dehradun in 2014 and as per the latest technique, the tiger population has shown an upward trend of 2226 tigers.

Only 13 countries in the world inhabit tiger, one of the most magnificent and charismatic animal on the earth.  India is not only one of them but has more than 50% of world’s population in the wild. Latest count declared during the 3rd Asia Ministerial Conference on Tiger Conservation held at New Delhi, India, in April 2016, indicates more than 2500 tigers in the wilderness of India. Any human being on the earth interested in having glimpses of this elusive cat in its natural habit would like to visit India. Tigress sighted (with radio collar) during Tiger Show at Kanha

National parks and Tiger Reserves namely Kanha, Bandhavgarh, Pench and Panna in Madhya Pradesh, Ranthambore in Rajasthan, Corbett in Uttarakhand, Bandipur in Karnataka and Tadoba Andhari in Maharashtra provide excellent opportunities and facilities for observing tigers. I remember I saw my first tiger in tiger show in its natural habitat for the first time in life on 3rd April 2004 at Kanha National Park in Madhya Pradesh. In fact I was a regular visitor to Kanha National Park from 2004 to 2009 and I never came back without sighting a tiger. In October 2004, I saw tiger and a tigress during courtship at Bandhavgarh National park. I also came to know that this is the best place to see tigers in India and having maximum tiger density at that time. My second visit was in June 2011 and it is unforgettable for the shot of Mirchhani tigress in the carpet of grass and the habitat shot of a Leopard.

In March 2005, I saw a sub-adult tiger in the very first safari in the Bijrani Range of Corbett tiger reserve, who growled for a long time as he could not catch the sambar. This sambar had incidentally crossed our vehicle. I still have those photographs on film, grown up tiger cub in sitting pose on the top of the hill against backdrop of sky and waiting for the quarry. Since my son, Bharat Goel, was not with me, I had to make immediate visit to Dhikala in May 2005 with him and again we were fortunate to see a tigress on the sambar road, about 10 meters from the main safari route. After some time we saw 3 cubs in the Ramaganga river from the sambar road what a sight. Of course we did not have high end cameras as we have today but the memory of three cubs crossing the water is still etched in our mind.

In 2007, that Pench National Park in Madhya Pradesh came into limelight as BBC was making a documentary  “Tiger : Spy in the jungle “ The best documentary till date in the world, where the real life story starts when the  cubs were hardly 15 days young. This is regarding a tigress with four cubs and the various difficulties encountered by the tigress in raising her cubs against all odds in the wild. A must watch for everybody if not seen earlier. I too made a number of trips during 2007 and captured some memorable shots of siblings and I saw the family as a whole. My last visit was in Jan of 2008.

For the first time I along with family members visited Ranthambore Tiger Reserve at Sawai Madhopur in State of Rajasthan and observed 4 tigers in the two safaris on 4th November 2008. I do recall the same day we happen to meet Sh. S Nallamuthu, a famous cinematographer shooting an injured male tiger in zone 4. He later on came out with famous documentary  “Tiger Dynasty “on translocation of tigers from Ranthambore to Sariska Tiger Reserve, Rajasthan. We have regularly photographed the famous tigress Machali T-16, the oldest tigress in the wild and T-24 USTAD, the male tiger who has been trans-located to Sajjangarh Wildlife Sanctuary at Udaipur as forest department thought that he has turned into man eater.

In the year 2010, I explored two new tiger reserves namely Tadoba Andhari Tiger reserve in Maharashtra  and Dudhwa Tiger Reserve in Uttar Pradesh.  In my opinion, Dudhwa has the best grassland in the country where tiger sightings are very rare. After repeated visit I was fortunate to photograph tiger for the first time tiger here in June 2016.

My first photograph of tiger of Dudhwa taken in 2016

I and my family members  came to Tadoba Andhari Tiger Reserve in Maharashtra for the first time in April 2010 .In the very first safari in Moharli range we saw a daring tiger cub popularly known as “circuit “away from the members of the family when it was around 4 months. In the evening safari we saw other siblings and the next day entire family was on water hole no 8 just adjacent to the tar road leading to Tadoba range. In June 2010 I saw 8 different tigers during 8 game drives. In December 2010, daring male cub circuit met with an accident in the buffer zone and future hero of Tadoba met untimely death. This young hero gave recognition to my son, Bharat Goel, by presenting him with simple and unthinkable shots during monsoons of 2010 to be precise between 10 August to 21 August 2010.

I have been visiting Tadoba not only for tiger in particular but it is complete in many aspects. The only tiger reserve in the country where you may see the sloth bear in the mid day and excellent sightings of Dhole (Indian Wild Dog).  During the last 5 years all the wildlife photographers on this planet, who have some interest in tigers have been attracted to visit this reserve. On a personal note I was blessed to observe total 23 different tigers including cubs during my two trips in Feb and May 2015. Apart from mammals. this is a heaven for birds in winters. In my opinion, at present, Tadoba Andhari Tiger Reserve is the best place to see tigers in India. The unique shot of a tigress with 4 months young cubs taken in Feb 2015  was praised by the delegates of the 3rd Asia Ministerial Conference on Tiger Conservation held at Vigyan Bhavan, New Delhi, India from 12th to 14th April 2016 .