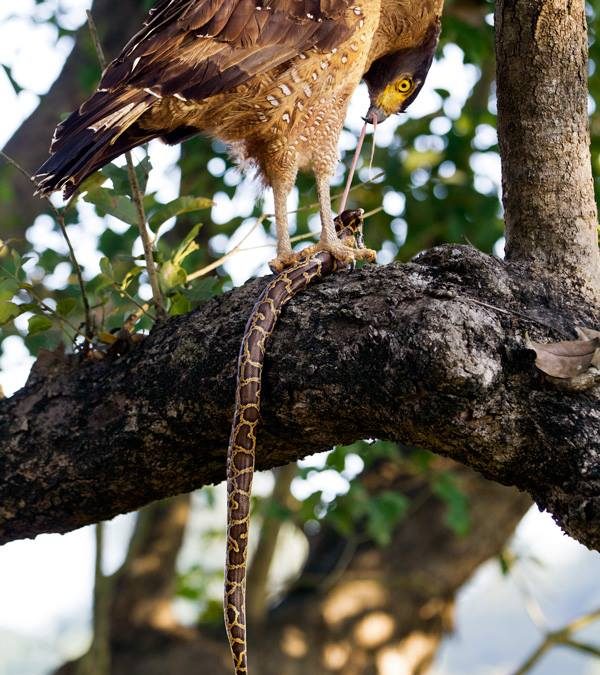 Fifty three years back ,exactly on 6th March 1967, when i joined the house namely Garuda House as a student in Sainik School Balachadi, Jamnagar in the State of Gujarat. I saw the logo of my house “Eagle with a snake in the talon” on a painting on the walls of the ante room.

At that time who could have visualised that in the time to come i would be a nature and wildlife lover and would be the first person to shoot with camera , Crested Serpent Eagle feeding on a Burmese Python, in the jungles of Dudhwa National Park, Uttar Pradesh in December 2011.

In our culture it is believed that when a child in born his/her destiny is written on the 6th Day of the birth by Goddess namely BHAIMATA and the lady who gave birth is not left alone at night by the family members as Goddess visits her to complete her task of writing the destiny.

I feel a few days after my birth destiny was written to witness the seen which I recorded in the month of December 2011 (after 56 years of my existence) and i came to know later on what was noted down.

Later photograph at Dudhawa National Park adorned the pages of the book namely “Winged Fire “ by Sh Valmik Thapar in 2016.

Based on my blog of 2016 on my Facebook page and after lot of correspondence, a note describing the above behaviour was submitted by me, my son Bharat Goel and an American Researcher (Herpetologist) Andrew Durso (at the Dept of Biology, Utah State University, Logan, Utah, U S A). The note was published in the December 2017 issue of Herpetological Review 48(4) 2017, pages 866 and 867, a Scientific Journal of United States of America.

Image from Dudhwa National Park a blessing from God on 26th December 2011.