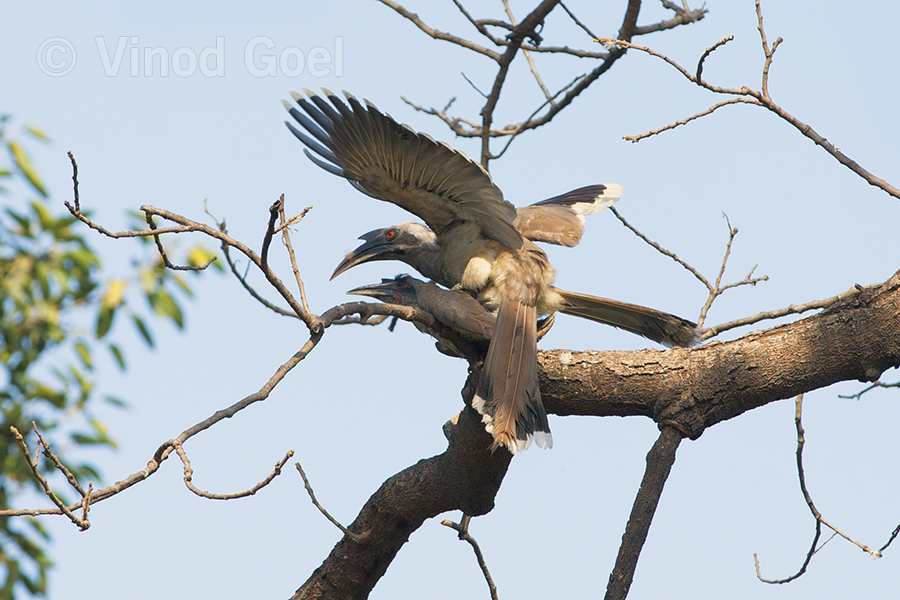 How can i forget the 20th March 2016 (also celebrated as World Sparrow Day) of 2016 when i was blessed to record the rarest of the rare moment of natural history among Indian Grey Hornbill in the morning hours.

This bird is native to Indian Sub Continent and generally found in the urban cities and towns in addition to wildlife parks. This is the most common of the hornbill found in India in addition to 9 more species found. In total there are about 60 species throughout the world.

During courtship generally it is the male which mounts over the female. However i was surprised to observe a female mounting over the male and mating lasted for about 45 seconds. Initially I could not believe my eyes but when I reviewed the image in the camera it was a great surprise for me.

With the help of Dr Raju Kasambe Ji, who is an authority on Indian Grey hornbill this behaviour was published by Bombay Natural History Society on the cover page of magazine NEWSLETTER for BIRDWATCHERS.

It is pertinent to mention that casque above the bill is larger in males as compared to the female. Secondly male are also bigger in size.
I may add that whenever see this this image I always remember my life partner Sangeeta Goel who merged with nature in August 2018 for the reason that on 20th March 2016 she was not well and requested me not to visit the Sunder Nursery. I then persuaded her not to stop me from going as on the next day I was going to Srinagar for a shoot and I promised that in case I am needed I would be back to house within 15 minutes after a tinkle is made to me.

Since she had great love for nature she understood my feelings and allowed me to visit and i had the rarest of the rare shot in my treasure trove.
Image from Delhi showing the unusual and usual mating behaviour taken on 20th March 2016 and at other times.