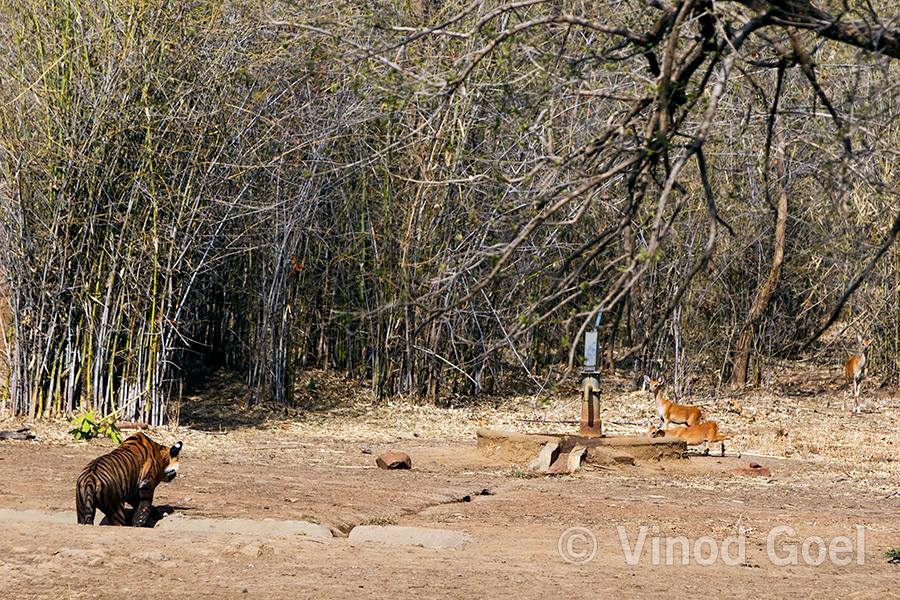 In the morning safari we happen to observe a family of tiger and were waiting to see their activity. Being quite hot one tiger cub was taking shelter in the water hole near the hand pump. The requirement of water for the denizens of the forest was done from this pump. In the morning forest staff would have pumped some water in the hole as some of it was lying in puddle in and around the hand pump.

We observed a family of Chousingha taking all precautions trying to approach the hand pump. The little ones approached it and were having water. For them it was a question of life and death as without water they could not survive. More ever their mother was at their back to give them moral support.

(Chousingha is a small antelope found in India and Nepal. It has four horns as compared to two in case of others. It needs to have water at regular intervals and hence tries to stay near water body. It is rare to see them as their habitat is lost to a greater extent)

The tiger cub on seeing the fawns at the hand pump, came out of the water hole and being a novice in hunting was cautious in his approach. As soon as the cub moved forward, the family of chousingha was on the heels and saved their life. I could freeze all the four of them in my camera, the mother, two fawns and the tiger cub.

This was another wonder from the Tadoba Andhari Tiger Reserve on 10th June 2010.

The image is on the office walls of the W W F – India, at Lodhi Road, New Delhi.