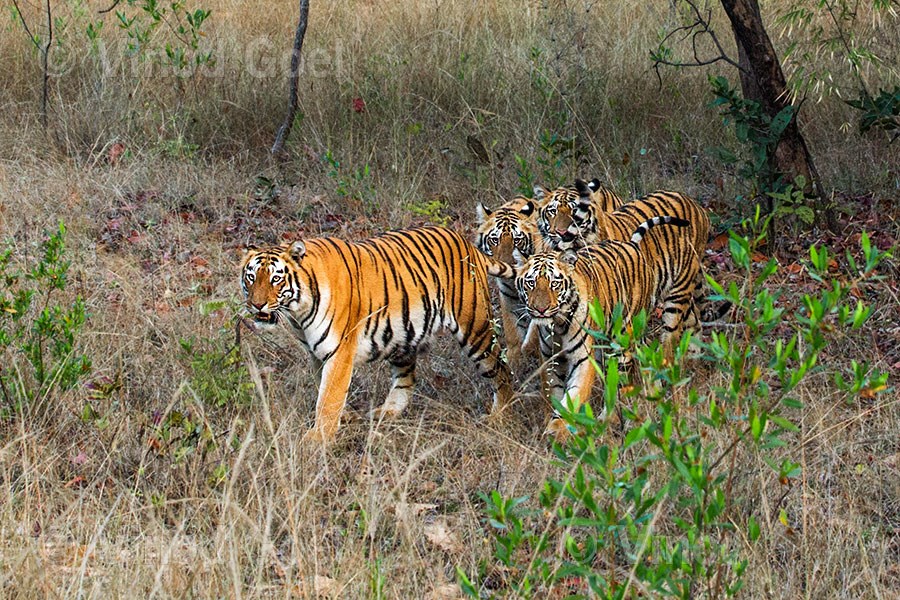 First of all I express my thanks to the viewers who had appreciated the post of 28th February, day before yesterday (Tigress with 4 cubs at the waterhole quenching their thirst and watchful at the same time)

Apart from the various groups where I had shared the blog , the same became VIRAL on various platforms.During the course of the Day, the same was picked by a forest officer namely Sh Parveen Kaswan IFS and tweeted by him on his twitter. Later on NDTV channel covered it on their electronic space. In the evening the same was on the print media of Hindustan Times.

Yesterday morning I was sent a paper clipping of the same tigress family from News daily Gujarat Samachar by my schoolmates from Gujarat . By the end of the day I got further information that the Navbharat times of Delhi has also covered the same story in Hindi.

Some viewers tried to know the name of the tigress in picture shot on 28th February 2015. In fact the tigress did not have any name like famous tigresses in various parks of the country such as Machhali from Ranthambore , Parwali from Corbett, Collarwali and Badi Maada from Pench Tiger Reserve and so on.

Another tigress whom I am following for the last 10 years at Tadoba Andhari Tiger reserve in the State of Maharashtra is MADHURI.

During my well known trip during February March 2015 when I was blessed with the UNIQUE image of the tigress family , I also met Madhuri with 4 grown up cubs in the morning of 3rd March (being my last jungle safari of the most memorable trip ) when she was leading from the front and cubs were following the mother. She was teaching them how to mark their territory.

I am sharing one of the pictures with you all.