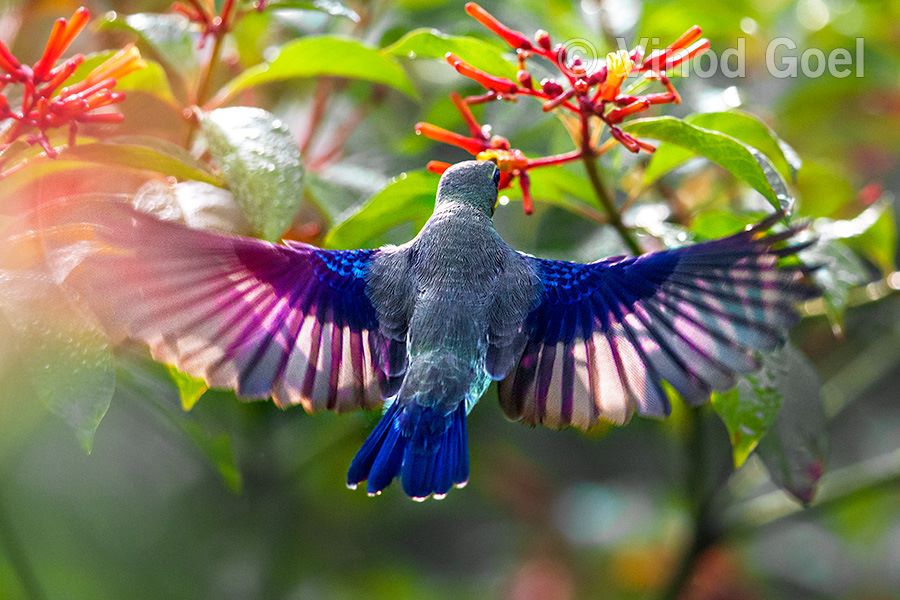 I am sure everybody must have seen small purple coloured birds, hovering over flowers during spring season, in a garden or on a tree. If not, try to look for them in your local environment. They are “purple sunbird”. Anyone can get easily de-stressed by just observing their activities. They can easily be found near flowering plants in homes or a nearby garden.

They are usually seen sucking nectar from flowers with the help of their longneedle-like bill. Their breeding season, which normally falls between the months of March and June, is the best time to observe their activities. They often perch on the transmission lines running along the roads and announce their presence by making a distinct sound.

During the breeding season, male’s entire body is glossy metallic purplish black with the wings appearing dark brown. One surprising fact is that, after the breeding season gets over, from August onwards, males completely transform. One cannot trace them from their color. They are recognizable by a thin purplish black streak running through their yellow under parts, in the non-breeding season. The female’s upper body is olive green and lower part is dull yellow as seen in the photograph.

Apart from nectar, they occasionally feed on small insects too during breeding season, when they raise their family of young ones. Their nest is quite shabby in appearance and found at a low height somewhere in the back doors or on a tree. Females build the nest. After the eggs are laid, both the male and female incubate them.

I have always loved watching them in the spring season, when the males are vying for attention of the females. One male chases other males from its territory. After chasing the other males away, he follows the female through the branches, as if trying to convince her that he is the most competent of the lot.

Enjoy the purple sunbird in the non breeding season.