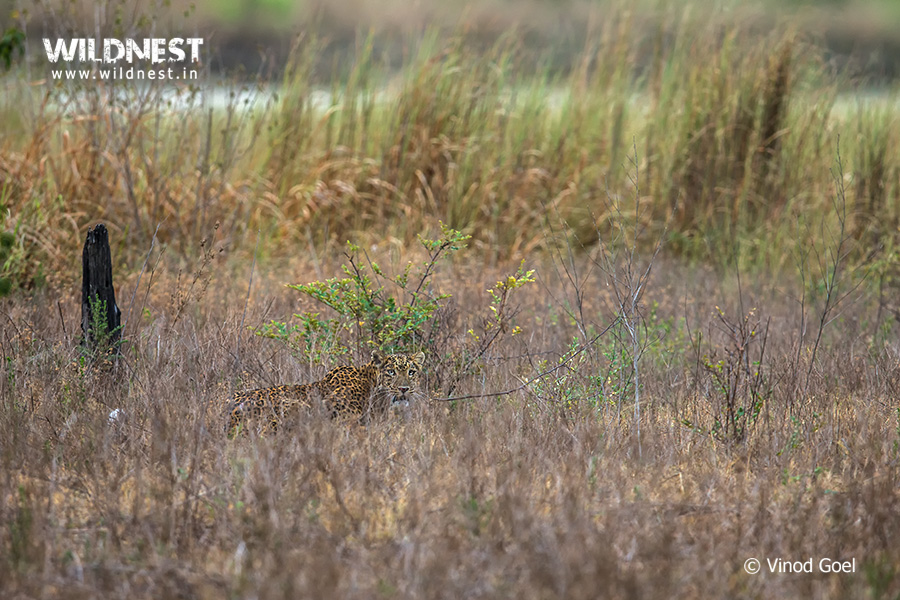 Wildlife Institute of India, Dehradun has recently estimated that there are about 12000 to 14000 Leopards in the wild. The State of Uttrakhand counts for 709 Leopards. It lags behind states namely Madhya Pradesh, Karnataka, Maharashtra, Chhattisgarh and Tamil Nadu. According to the fact that Uttrakhand has reported maximum number of leopard deaths in the country. This is mainly on account of increased man-animal conflict as these cats are forced to enter into the human habitat. The reason states to be, on account of their space being encroached constantly by homo-sapiens, especially during summers. It is pertinent to mention here that these shy cats can adapt themselves easily into any kinds of surroundings.

I remember my first ever leopard sighting in its natural habitat was at Kanha National Park (Madhya Pradesh) in last week of June, 2004.  It was truly memorable. Early in the morning, it was still a little dark, when we entered the park; it was only the 5 minutes of our presence in the park, did we see, a leopard at a distance of about 6 meters from our vehicle. It was well camouflaged in the leaves on the roadside and it took us few seconds to realize its presence. Since we were quite new to the world of wild, we got a little scared by his looks as if he would pounce straight at our vehicle. But it stood there for few seconds and then walked away peacefully to the other side of the road. From 2004 to 2009, during my various trips to this park, I didn’t even get a single good shot of this shy animal.

In May 2008, I got a chance to visit Nagarhole National Park located in Karnataka. I was surprised to know the fact that leopard sightings were much more than that of tiger in the park. I too had a sighting of a leopard, who was relaxing on a branch of a tree. There’s no doubt that Nagarhole is one of the best forest to see leopards in their natural habitat in South India.

Another instance that I recall from the year 2010, during my trip to Tadoba Andhari Tiger Reserve in Maharashtra. With the morning sunrays shining all around the reserve, I got lucky to photograph a leopard, as soon as he made a kill of a spotted deer. It was hiding in the bushes, behind the thick trunk of a tree which was hardly a few meters from the road; waiting to drag the kill inside, back in the bushes. Bandhavgarh Tiger Reserve in Madhya Pradesh is famously known for Tiger sightings. I was fortunate to have a memorable habitat shot of a leopard on 26th June 2011. The sighting was hardly for less than a minute but it is still etched deep in my memory. This shot also got its place in the book WILD FIRE by Valmik Thapar, a well-known naturalist, conservationist and a writer.

In 2010, I learnt about Bera, a small town in the district of Pali, Rajasthan where sighting of leopards are assured. Because of various official commitments I could only visit this place at the end of 2013 and spent two days. We saw leopards alone with their cubs, sitting together on the rocks for hours. If someone has never seen a leopard, then Bera and nearby places are the best to see the elusive cat. Although, I missed the feel of the jungle there. Ideally, when a predators such as a leopard or a tiger or even a lion moves in the jungle; it is observed by their prey, they make fierce loud alarm calls which alerts other prey about the predators movement. In Aravalli hills, it is devoid of prey such as a spotted deer, sambar deer, and also wild boar etc. The feel of an ideal National Parks and Wildlife Sanctuaries is lost. Click here to read about Bera, how to reach there and more

I have been regular visitor of Rajaji National Park, for the past 6 years. It consist of 6 different ranges, most famous being the ‘Chilla Range’, across the River Ganges. This are is known for Asiatic Elephants, however I have also been observing leopards here too. According to the forest sources, there is only one Tigress in another range which is named as ‘’Motichur Range’ which has aplenty of leopards and elephants. In June 2015, I had my first tiger sighting at Chilla Range in Rajaji National Park, I again visited Ranipur Range. I was yet again fortunate to see 2 leopards in different area of 25 kms stretch from the entry gate to the Beribara Forest Rest House. It is estimated to have 22-25 leopards in that area alone. Since this area is devoid of tigers, leopard is the king here, hence lot of leopard sighting can be done. The best place to observe leopard in North India, is to visit ‘Ranipur Range’, located adjacent to residential colony of Bharat Heavy electricals Limited, Haridwar. I wasn’t aware of the rich wildlife that reside here. My son, Bharat, Co-founder of Wildnest Travel and Photography had especially advised me to explore this particular range for leopards. During my safari, in Apr, 2015; I was not completely prepared with my equipment, I vowed myself to visit the place again after the sight of the 3 leopards (for almost 2 hours). Generally, these sightings takes place in the evening hours, when sun is on its last lag of the day. They are usually found sitting on the boundary wall between the forest and the colony.

Tourist who really wants leopard sightings around Delhi, Rajaji National Park can be a heaven of leopards. It is mere 4-5 hours’ drive from the country’s capital and the park has less tourist pressure unlike Corbett, Ranthambore.