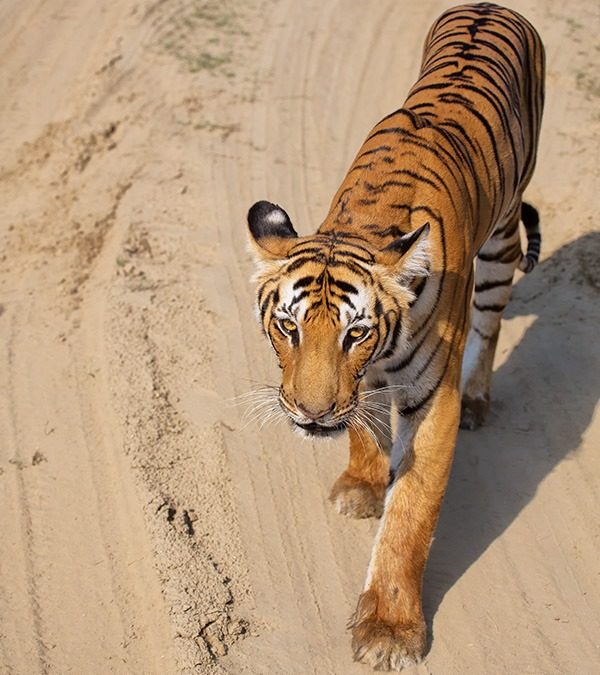 Rarest encounter with a Tigress (Parwali – Known as Queen of Dhikala)

I have been visiting Dhikala with my family, heaven in the midst of the Corbett National Park in the State of Uttrakhand from the year 2005 and it was in the summers of 2017 when we had the closest encounter with the big cat (Parwali, the most famous tigress in the Dhikala Zone) where I was seeing in her eyes hardly just 2 meters away from me.

While waiting at the High Point area on the opposite side of the Forest Guest House at Dhikala, after giving indication of her moment through langur monkey and the movement of spotted deers, after crossing the bhang area the tigress came to the safari path. Now the tigress was between two vehicles and I was in front as it was coming towards my vehicle. In such a situation any wildlife photographer always gives space to the animal in between. Then what I found was the vehicle ahead of me did not move and the tigress was coming close and close with each stride towards my vehicle. She almost touched the vehicle and we were looking into each others eyes from my gypsy. Not finding any space to move she turned back and no space to move. She left the main route and melted into the bhang vegetation and disappeared.

This was also the last jungle safari to a well known park, for my LIFE PARTNER who had been to many of the parks of the country during her lifetime as she merged with nature on 3rd August 2018. Now she has become PARWALI.

The look of the tigress so close to me reminded of the lovely song from the Hindi movie SAAJAN:-
“BAHUT PYAR KARTE HAI TUMKO SANAM……. KASAM CHAHE LELO KHUDA KI KASAM”

The image of Parwali (tigress) from the Heaven known as DHIKALA taken in May 2017.