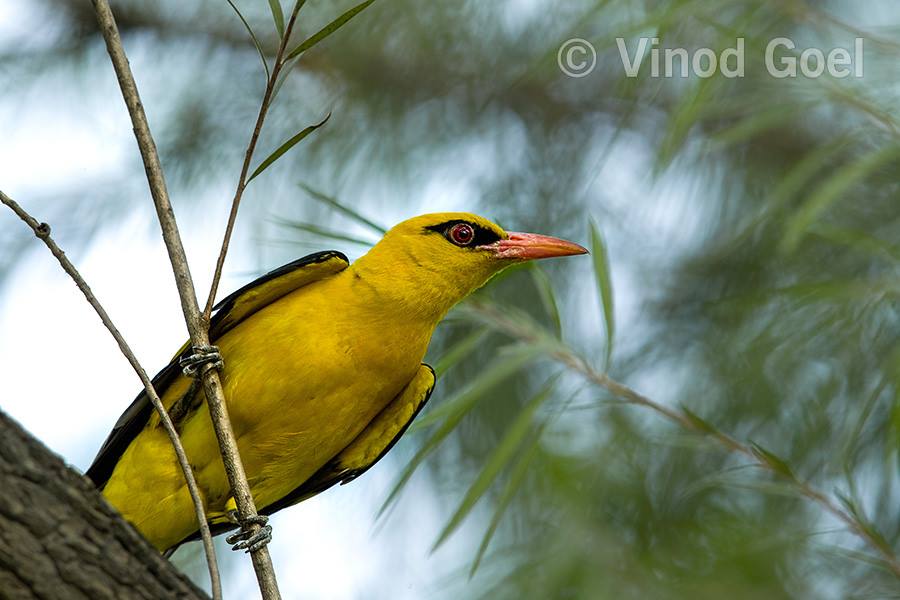 Since my school days I have been hearing that India “i.e. Bharat” was known as the ‘Sone ki Chiriya’ and that has attracted numerous attacks for loot of treasure, but the most of those foreigners stay put in this country by making it their own home and contributed to the prosperity.

The land of plenty, termed as “Golden Bird” (Sone ki Chiriya), had been a dream destination for the people from the west & that forced me to wonder as a child whether there was really such a bird which is made of gold & where do I find that ? I think, if I had not turned a bird watcher, I would not have known that such a bird known as ‘Golden Oriole’ actually exists and known as Sonechiraiya…

For the first time in my life I had a glimpse of golden oriole in Kanha National Park in the year 2004 . I was fortunate enough to witness the rare courtship of golden oriole on a tree in the compound of Madhya Pradesh Tourism Resort at Mukki Gate 2007.

The male golden oriole is actually golden yellow in colour, while the female is dull green. If visible, it’s easy to differentiate, as both have black eye stripe that is cleverly concealed & eyes look sharp and red in natural light. But even a bird watcher needs huge luck to have a glimpse of these rare birds because of the fact that these are arboreal and hardly touch ground. The best places to see them are mango orchards in summers & that gives them a unique name Aamarpakshi (bird of mango). The best time to see these birds is summer, when they chase each other during the courtship, and that makes it extremely difficult to take their pictures.

I had been fortunate to witness several golden orioles in last four years in their various acts in Delhi itself. At the end of April, 2014, Initially I saw a pair of male and female. But after a month, I found four of them – three male and lone female. I could understand that this was courtship period and all the male birds were trying to convince the female for breeding. Flying from one branch to another, then one tree to another makes their presence felt in a different platform for a bird watcher like me. But the most intriguing aspect is the fast paced movement of their which makes humanly impossible to follow them, which is a distinctive quality of golden oriole. I kept on waiting for hours together at a particular place to hear that typical sound created by them.

It was indeed a pleasure to follow these beautiful birds. As an avid bird watcher, it’s a big event to see four golden orioles at a single place and that too in a single frame, During the same period I also recorded the fight between the Golden Oriole and a Black Drongo.

The Golden Oriole as well as the fight shots are the part of the ongoing Exhibition “Aravalli Utsav “at the India Habitat Centre at New Delhi. The exhihibition is up to 20th of November 2017.