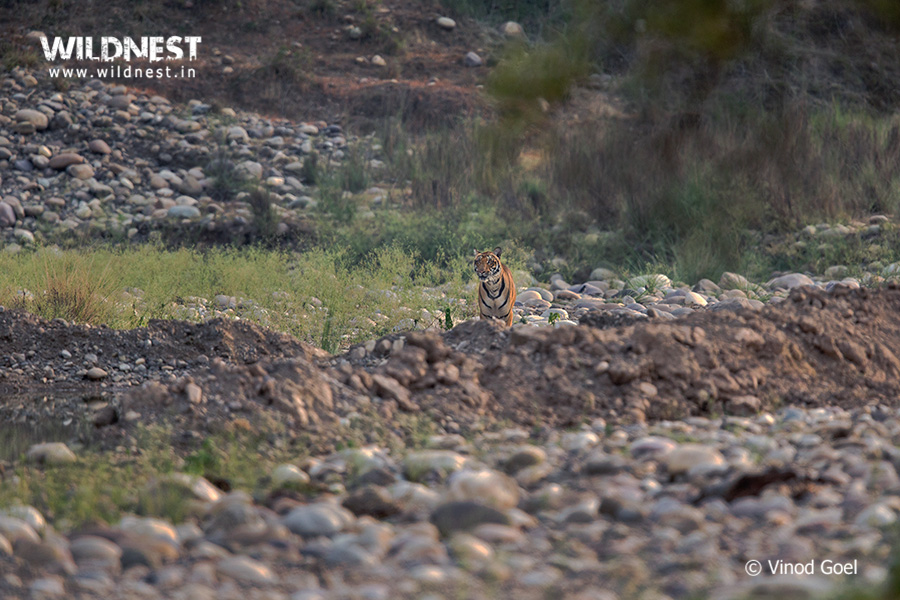 In my last blog “In search of a tiger: My journey to Rajaji National Park; I wrote that I have been visiting this Park for almost 5 years, but never could see TIGER.But, I decided to try my luck once again with an obvious greed of seeing the Big Cat as the Park was about to close on account of monsoons for 5 months from June 16th.

My son Bharat suggested me to explore all three Ranges of Rajaji National Park – Chilla, Motichur & Ranipur –   which could be covered well by making Hardwar as the base camp. I spent 1st day at Ranipur and was fortunate to see three Leopards in the late evening. Afterwards, completing three safaris at Chilla Range on 11th and 12th June, I went for a safari in the Motichur Range.  This was my first ever visit to Motichur Range that is very different from other ones as it is full of Sal trees and we were lucky to see two Tuskers.

On 12th June, we got the information about Tiger sighting near water body at Ghasi Ram in Chilla Range. We also got to know from a guide about a Sambar killed by the same Tiger near the same spot that was enough to visit Chilla Range next morning.

Next day morning we started at about 0520 hrs & we spotted a wild elephant as if looking for early morning breakfast on our way to Chilla gate, on the Chandi Devi Chilla road. We were startled by a loud Chital call indicating movement of a predator… a Leopard nearby. The calls continued for about 10 minutes, but we gave that a miss because we had to reach Chilla Gate.

At the entry point of the forest, I told my driver cum guide Suresh Pandit to take the vehicle straight to Ghasi Ram water body without stopping at any forest chowki. While descending the slope, Chitals started making loud alarm from as close as 20 meters, but there was no sign of any predator. After a shot wait we saw a Tiger that was hiding behind bushes on the small hillock. It came out, but went back to his hideout seeing us. The Tiger came back again after couple of minutes, stood for a while looking at us and went back in hiding again. Our never ending patience gave us the gift, we were confident that the Tiger will come back for the kill & almost half an hour later it came back to the kill, looked at his prized catch, stared at us and again went into hiding. In the absence of the Tiger at the kill, jungle crows were having a gala time. They had nicespread before them. After munching flesh, they were quenching thirst at the waterbody adjacent to the kill. After waiting for another 40 minutes at a spot about 300 to 400 meters from the kill,we observed that the Tiger came again near the kill from bushes opposite us. After seeing us, it left again without having anything as if pretending that he is not interested in food. This behavior led me to the conclusion of his extremely shy nature. After realizing this, we decided to leave the spot and leave the Tiger with his feast. Finally, my search for a Tiger in Rajaji National Park was over. On 13th June,2015, the forest gave me the gift “THE TIGER” as soon as I explored all the different Ranges. Normally, number 13 is linked to bad luck, but for me it’s been lucky.