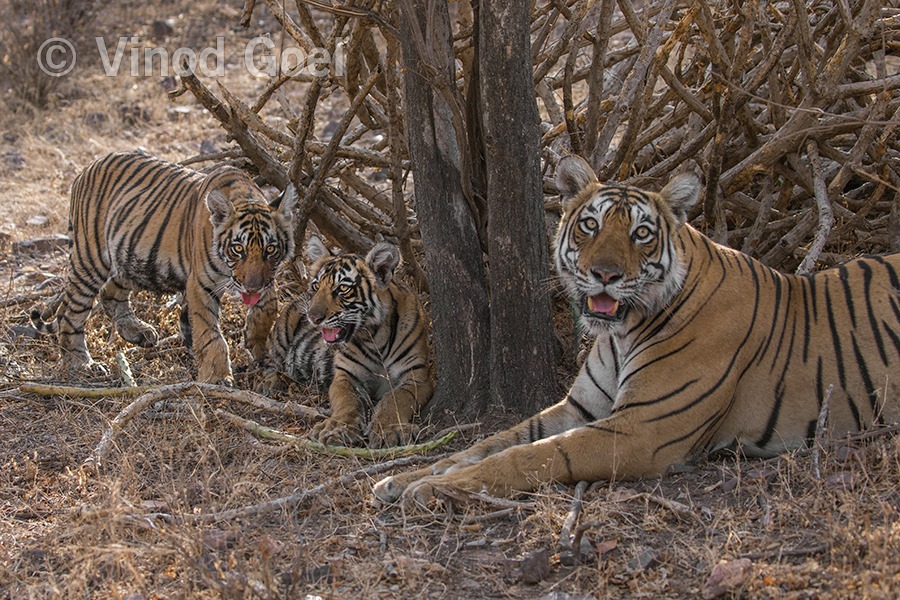 In the evening of 22nd May 2019, I was informed by Sh Balendu Singh Ji, my very dear friend and the owner of Hotel Dev Vilas, that the tigress Arrowhead which rules the area of Zone 3 and some part of Zone 4, came to the Malik lake.

While taking a round she observed carcass of a sambar deer floating in the water. She must have realized that the same must be under the control of a crocodile. Hence she sat down on the bank of the water body to take a chance. She also noticed the movement of the crocodile tearing the body parts of the sambhar deer. While sitting at the banks she pretended that she is just relaxing and did not show any hurry in pouncing on the carcass. A number of crocodiles came and each one of them was trying to have his pound of flesh.

At an appropriate time she jumped and grabbed a side of the carcass and made efforts to bring it on the land. The other end was with the crocodile. She had to really make lot of efforts to free the body from the jaws of the crocodile. Ultimately she won the battle and brought it safe on the land. She was panting and got exhausted and rested. As the safari time was over they had to move out of the park. So next day it was expected that Arrowhead would bring its cubs to the kill for satisfying their hunger. This news spread like a wild fire.

On 23rd May morning we observed the tigress Arrowhead with 2 cubs at or near the kill and the family was enjoying their breakfast. In between the family went to quench thirst at the lake and the cubs kept on playing and kept on moving from one place to another making it difficult for the mother to keep an eye over their activities.

A time came when the tigress was hardly ten feet from our vehicle and she sat under a tree to enjoy the coolness provided by the shadow by the branches of the tree. The two naughty cubs came cautiously near her. My NATI (daughters son) who persuaded me to arrange for the trip, really enjoyed the well known Superstar Tigress of Ranthambore with her cubs before his eyes. This was also the closest encounter for him in the wild.

I am sharing one of the images which was taken in the morning safari of 23rd May 2019.