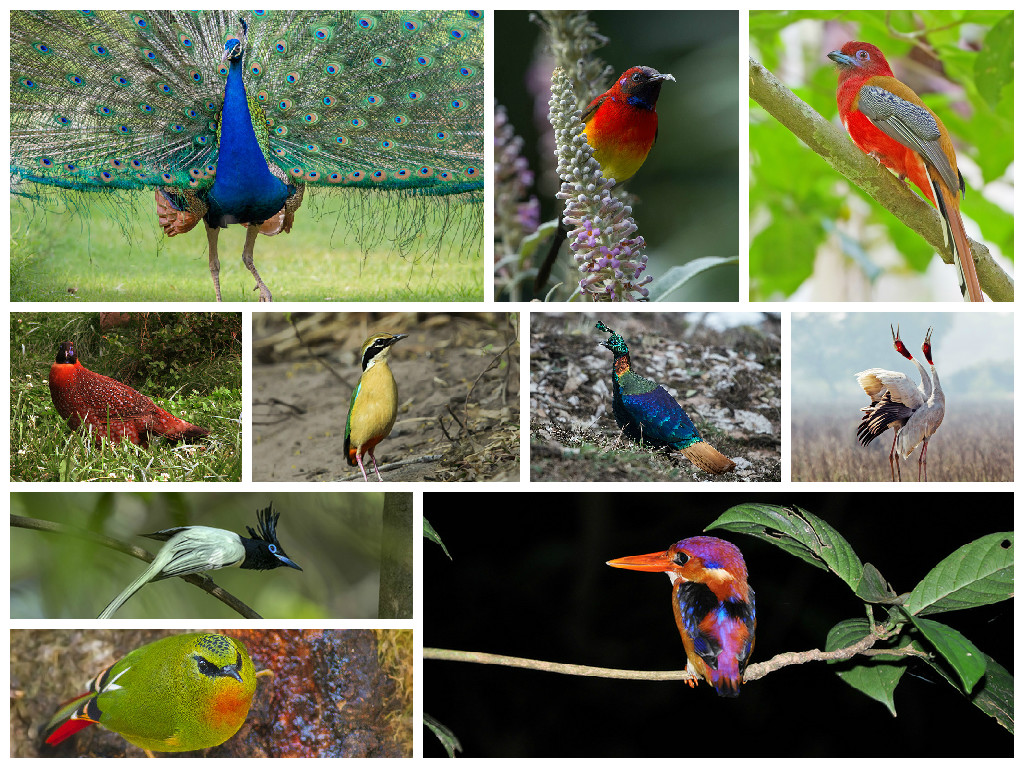 “The reason birds can fly and we can’t is simply because they have perfect faith, for to have faith is to have wings.”

It’s a plane! It’s superman! No, it’s a bird. Birds are essentially one of nature’s glorious and most important creations. Not only in terms of their role in the food chain and their egg-laying abilities, but also in their resplendent and truly magnificent beauty.

An interesting fact to be noted is that generally in the Aves species, the males tend to be predominantly blessed with attractiveness vis-a-vis their female counterparts. So apparently, the phrase “fairer sex” does not hold true for birds. The reason for this is that the primary role in mating is played by the male species, and therefore they have contrasting shades and distinctive features such as a crown or a tail in order to look attractive.

This article attempts to describe some of the most beautiful avifauna of the country, which will leave you gasping for breath and struck in awe in case you ever happen to see them. The toughest contender for the position of the Indian National bird, the Sarus crane is the only resident non-migratory crane of India. It is also the tallest crane, standing at a height of 5.6 feet. Found mostly in Uttar Pradesh (also Sarus Crane is the state bird of Uttar Pradesh), parts of Rajasthan, Haryana. The Sarus Crane is also considered a symbol of marital fidelity in India since they are believed to mate for life. Might you consider taking them along on your honeymoon? Nah, just kidding – you’ll spoil theirs.

However, this species is quite vulnerable to extinction and a lot needs to be done in order to prevent the beautiful bird from being wiped off. The Indian Pitta gets its name from Telugu, where Pitta means small bird. Please do not confuse this with Pita, the sumptuous bread used in Lebanese cuisine with that delicious roasted chicken and- sorry for digressing. The Pitta roosts mostly on the trees, in Sub-Himalayan regions and Southern India in the winters. One of the rare birds of India, it has strong, long legs and is majorly found feeding on insects from the ground. Its brilliant green and blue colors illuminate dark rain forests. Redheads have been in vogue since times immemorial, if you know what I mean huehehe. Its characteristic blue bill, and blue eye ring along with red and yellow plumage make it a class apart.

The redheaded trogon is found in regions of subtropical or tropical forests, especially in the Eastern parts of India and its neighboring countries. Also known as the Crimson-Horned Pheasant, the Satyr Tragopan is found only in the foothills of the Himalayas. It lives in moist oak and beautiful rhododendron forests, and has been subjected to severe loss of habitat due to the excessive hunting and pollution caused by us, the wanton human beings.

The Satyr Tragopan has a rather fascinating mating procedure: the male grows blue horns and a gular wattle during the mating season, and hides behind a rock waiting for a female to pass by. As this one lucky female does, the male performs a luminous and skilful display; at the end of which he stretches to his full height and exhibits all his ornaments. A thing to be noted here is that a male satyr trapogon probably just hides behind a rock for the rest of his life in case a female doesn’t pass by that very rock. (however, this is not a fact but just a figment of the author’s crazy imagination) Essentially found in the north-eastern states of India, Mrs. Gould’s Sunbird resides in temperate forests and tropical/subtropical moist montane forests. John Gould, a famous British ornithologist, gifted this colourful little fellow to his wife; thereby giving it the aforementioned name and raising the bar extremely high in terms of presents a man can give to his wife.

Sunbirds tend to be small, but highly energetic. Mrs. Gould’s Sunbird is one of the only twelve species of sunbirds found in India. This amazingly long-tailed, medium-sized bird is migratory in nature and is found in thick forests in the Indian subcontinent, only in the summer season. The Asian Paradise Flycatcher feeds primarily on insects: it often swats them directly from the air underneath a densely canopied tree; the sneaky rascal. It is a really loud bird that makes shrieking sounds when it talks – a lot like a teenage girl at a mall.

The Asian Paradise Flycatchers are socially monogamous, which means that both the males and females share the responsibilities of incubation, nest-building and feeding the young ones. They set a nice example to follow for the patriarchal society we live in.

Note: This bird in not available at above places round the year but at specific time, for more details contact our wildlife experts. Hey look, finally a bird you’ve heard about! Settling in at number four, we have the Indian National bird, i.e the Peacock. Peacocks are actually considered sacred in Hinduism, because the spots in their tail signify the eyes of gods (which is quite hilarious if you think about it – god watching people through peacock’s tails, I bet that happens all the time).

With the thick blue-green plumage and the iconic rain dance performed while mating, peacocks generally thrive in rainforests and grasslands. However, to be pedantic, ‘peacock’ actually refers only to the males, and ‘peahen’ refers to the females. They are collectively known as peafowl. A collection of peafowl is also known as a ‘party’. So the next time you are forced to go to the zoo with your annoying relatives and their little kids, you can tell your friends you’re going to a party without lying.

Note: Indian Peafowl id found mostly throughout the country except north east states of India. Above mentioned tours are of places, which are best to photograph this specie. This pip-squeak of a bird is also known as the black-backed kingfisher or the three-toed kingfisher. It resides in the south-western areas of the Indian-subcontinent, especially in densely shaded forests of the Konkan region.

Apart from having quite an exotic name, the oriental dwarf kingfishers also have nests in the shape of horizontal tunnels; that can range up to a metre in length. Their young usually incubate in 30-45 days, and are fed a richly varied diet ranging from crabs, snails, frogs, geckos, skinks, crickets, dragonflies etc – basically the kind of stuff the French eat. *shots fired* A very close competitor for the first position in this list, the fire-tailed myzornis is a member of the monotypic rare genus of – well, myzornis. It was formerly placed in the Old World Babbler Family (alongside George RR Martin and JRR Tolkien).

The fire tailed myzornis is the closest thing, both in names and looks, to an actual Pokemon; and is a local resident of the Himalayan range, living in subtropical or tropical montane forests. It is now a rare bird to be seen, slowly fading away in Nepal and China.

The name originates from the bright yellow, orange and red colours found at the edges of the bird’s tail, a stark contrast from its green body. The fire tailed myzornis is one of the more silent birds, and its sounds include an occasional high-pitched “tsik-tsik” – exactly like a teenage guy at the mall who has to pay for his girlfriend’s purchases. Ladies and gents, we have a winner! The Himalayan Monal wins this competition. It closely resembles a peacock, but has vast distinguishing features such as an iridescent rainbow-like plumage, a wiry metallic head and crest, and a reddish-brown neck.

An interesting fact is that in the first year of birth, the males and females resemble each other to quite a large extent. The only major difference is that the males are slightly larger and have black feathers on the neck and the breast.

So that’s that for today. Do tune in soon for another beauty competition!