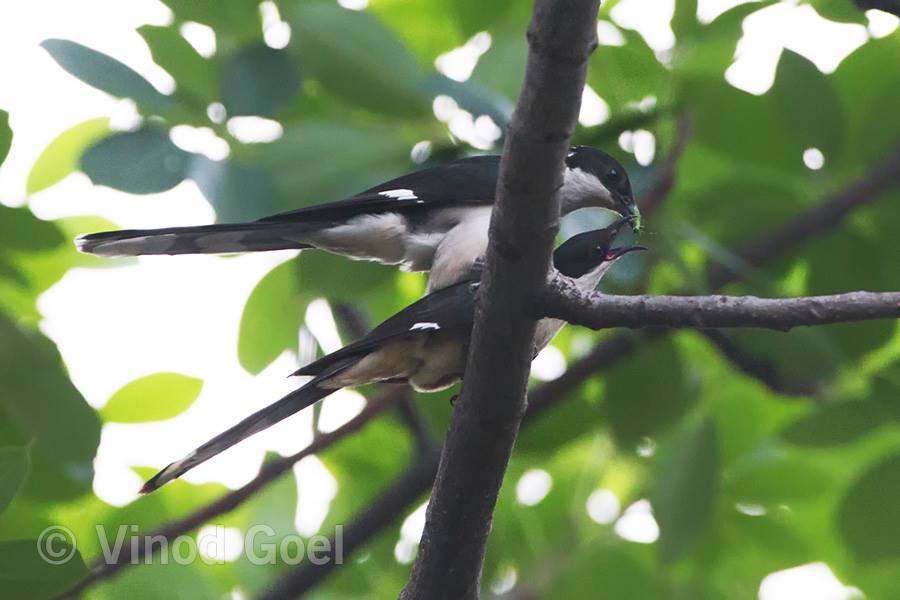 Seeing Pied Crested Cuckoo and observing a jungle babbler feeding the chick of the pied crested cuckoo, later on .

I saw Pied Crested Cuckoo on a Keekar Tree, where they generally perch early morning. I saw two of them perched high on a canopy. I observed some movement and kept on watching them continuously for 5 minutes. It was their mating, rare shot in the wild. I do remember observing their courtship in the air on 11th August and mating on 16th September in the heart of Delhi in 2014.

Pied crested cuckoo is a member of the Cuckoo family. It can be easily identified by two colors white and black. These are very vocal during the breeding season. In fact, they are originally migratory birds from South Africa, come to India along with the South West monsoons for breeding.

It is also a fact that apart from brain-fever (Common Hawk Cuckoo) and Asian koel , Pied Crested Cuckoo (birds of Cuckoo family) also do not weave/make nests, but place their eggs in the nests of a jungle babbler . The jungle babblers brings up the chicks after hatching as if they are of his own. This has been happening for generations and would continue as such.

For the first time I could not believe my eyes as I was observing a babbler feeding the pied crested cuckoo and could freeze some frames but not great. Later on I observed the similar activity near the Sultanpur National Park in 2015. But last year on 27th of September 2016 , I was lucky to shoot at a close angle in the heart of the city and could follow the babbler and the chick for about 45 minutes.

A few days back I was again blessed to see host parents jungle babblers not only imparting training but also feeding the chick of the pied crested cuckoo in the heart of Delhi.

Some of the images are here. The chick is asking for food from the foster parent. What a sight !