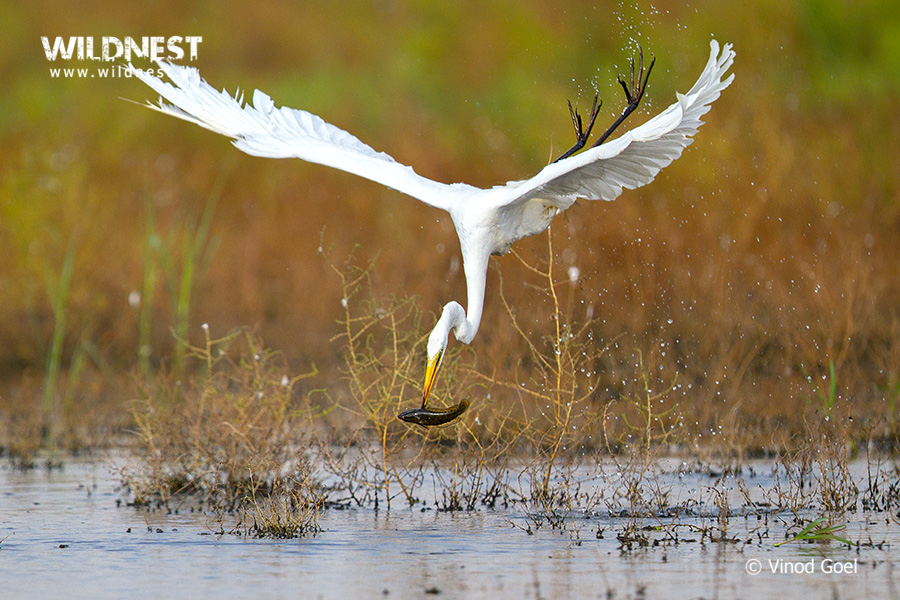 Birding is a common hobby nowadays for a nature lover. I have personally made a point to visit as many birding sites that I can. Since I am an avid birdwatcher, I have listed down some less traveled and some very famous birding near Delhi destinations. Read below to find yourself an ideal site for birding near Delhi and nearby places.

If you are new to birding, read Bird Watching Kit For Beginners The smallest and the only National Park in Haryana is Sultanpur National Park. It is approximately 50 Km. from Dhaulakuan and 15 Km. from Gurgaon. It has an area of about 1.43 sq. Km. Known to be the home to over 250 species of birds, one can also find a lot of Nilgai and Jackal. By the middle of the month December, all the migratory birds (more than 100 species) arrive here. This place provides the best feeding ground. They start back to their home journey by the end of Feb. One can have a grand view of the Sanctuary from the top of the watch towers at vintage locations. The area behind the sanctuary is excellent for Waders or Shore birds. One can also enjoy a great sighting of the birds in the agriculture fields, such as Thicknee, Indian Courser and Lapwings. One of the less traveled birding destination, Basai is only known to an avid birdwatcher. It is one of the smallest National Park of India and is 50 Kms away from Delhi. The naturalist at National park assures to acknowledge you the high importance of Basai wetland. As this small area does not have big trees except for tall grass or small bushes, arboreal birds are ruled out completely. During summer, you can spot Purple Moorhen, Pheasant Tailed Jacana, Bronze-winged Jacana, Egrets, Darters, Sarus crane etc. Winters is really time to enjoy birding as a large number of migratory birds comes here. One can also observe Bar-headed Geese, Gulls, Greyleg Geese, Spoon Bills, Marsh Harrier, Common Starling, Wagtails, and Wire-tailed Swallow. The beauty at this wetland is the birds are very close to you and you can have good shots with a reasonable camera. Please don’t miss your binoculars. This is known as one of the best birding destination in and around Delhi. One of the most loved birding sites for the bird lovers, these two places are covered with beautiful wetlands which are host to a large number of migratory birds every winter. It is just 50 Kms. away from Delhi and brings lots of birdwatchers attention. A natural trail has also been developed by the forest authorities in a collaboration with the Greater Noida and W. W. F-India, which takes visitors to the dense forest and the different wetlands to showcase the nature’s beauty. One would love the presence of Date Trees forming the natural borders of the water-body. One may also adore the beauty of a Bengal Florican which was photographed in 2014. I too have seen and photographed birds such as Painted stork, Wooly necked stork, Open-billed stork, Spoon-billed, Black-necked Stork, Grey and Purple Heron, Pond and Night Heron, Golden Oriole, Purple Moorhen, Pheasant Tailed Jacana, and varieties of Egrets. Waterfowl such as Northern Pintail, Northern Shovellers, Greyleg Goose, Gargany is also seen here. This shallow wetland, away for about 75-80 km. from Delhi, is very less known to all birders. I was extremely surprised with a sight of Flamingos and White Pelican, in the month of October. One can see beautiful birds such as Black-tailed Godwit, Comb Duck, Common Teal, Rudy Shelduck, Pied Avocet, Sarus Crane, Pelican, Greater flamingo, Spot-bill Duck. The best thing about this place is that one can photograph from the vehicle (provides to be an excellent hide). Shallow wetlands and quite accessible metalled road give ample opportunity to the birders for excellent photography. One of my friend Yashir Arafat told me about a heavenly place for birding near Hodal, which is approx. 100 km. via NH1 from Delhi. After checking with few people en-route to reach the place, which is situated on the outskirts of a village named Shesh Sai. I made this trip on one of the foggiest days in winters. Between the wheat fields along the kucha road, one can see Mynas, Sparrows, Doves, Rock pigeons and Kingfishers feeding on their breakfasts, early in the morning. I was quite amazed to see Bar-headed geese also feeding on the ground. I was informed by the local villagers that these birds come to this village and locals here, don’t let any visitors to hunt them. Birds were quite comfortable with the locals being around (few children were playing cricket nearby). One may also find Purple heron, Darter, Sparrows. One of the best features of this time was, we also saw a bird which was looked similar to Lapwing; we later identified as White Tailed Lapwing. It is not very common for the birders.

Visit our gallery of Birds Photos About 70-80 km. away from Delhi, Dighal came to my notice; after the Big Bird Day count which was reported by The Time of India 14th Feb 2014. According to their reports, they recorded sightings of some rare birds, namely Marbled Teal and Greater White Fronted Goose. I made my plans to visit to see the rarity of these birds with the help of a local guide – Rakesh Ahlawat. This place has aplenty of water bodies which are filled with migratory birds. I happen to also see 12 Flamingos in the sky. It is an ideal place for birdwatching. I have been told that this park had turned into a lush green forestry from the barren piece of land; and now is proudly home to diverse birds, mammals, reptiles, butterflies, rare medicinal plants and varieties of insects. Within a span of 11 years, this barren piece of land has become one of the birding destination of Delhi. Over 190 species of birds, 90 species of butterflies, 24 species of reptiles and 100 species of plants resides in this big park. Like any other forest reserve, this park maintains 3 levels of food chain system named – plants, herbivores and carnivorous to maintain a natural balance.
This park is only meant to preserve various life-forms and currently not accessible to the public. However, to implant seed in the minds of our youngsters, educational trips are permitted, time to time. This Park is spread over 457 acres near Wazirabad village, New Delhi; it has wetlands, fruit conservatory, herbal garden and a bamboo forest inside. I am a regular visitor to this park for almost 4 years, despite the park not being open to general public at a larger picture. An ideal place for birding in Delhi, this park has faced a lot of positive changes under the leadership of Dr. C.R. Babu. Thousands of big lotus flowers make a charming appeal to the place, attracting a lot of birds here. I saw Red-crested Pochard here itself for the first time in my life. You shouldn’t be surprised to know that Delhi zoo is one of the best zoos in the world. One can spend hour and hours on birding in Delhi zoo.  Observe Painted Storks, which arrives with the end of monsoons (Aug-Sep). They stay here for family life and leave with their grown up chicks for a long journey ahead. Some other birds such as Barbet, Kingfisher, Wagtails, Egrets, Peafowls, Red-vented Bulbul, Yellow-footed Green Pigeon, Rock Pigeon, Jungle Crow, House Crow, White Eye and many more can also be found here.

Are you looking for birding in Delhi? Yamuna Ghat is one of the places to go for a pure delight of bird-watching! Thousands of Gull flock to Yamuna ghat for morning breakfast whilst many Delhiites are still sleeping. Quite bold and opportunistic in nature, they are friendly as well. They feed on fish, worm scraps and sometimes snacks (namkeen) offered by the locals during boat safari. The ideal time for them to visit here is during the winters (end of Oct – Feb). You will also find Darters and other big birds spreading their wings flying high in the sky.

Join Gulls at Yamuna Ghat, a birding tour with Wildnest

One of the biggest park in Delhi which has Mughal history behind it. Roshanara was the second daughter of Shah Jahan and thus the name of the place. Birdwatcher prefers this place as one of the best places as birding in Delhi. Many migratory birds visit the lake inside the garden during the winters. Local resident birds such as Parakeets, Doves, Babblers, Sunbirds, Barbets, House Sparrows, Indian robin and many others can be sighted in the Park.

Lodhi Garden is known to be the best-maintained garden of Delhi making it most visited birding site in Delhi. With large, tall and old trees, it is spread over 80 acres in the midst of historical Delhi. It homes to more than 50 species of birds such as House Sparrow, Bulbul, Owls, Crows, Doves, Mynas, Woodpeckers, Lapwings, Kingfishers, Parakeets, Barbets, kites, Pigeons, Ducks, Swifts, and many migratory birds also arrive during winters making it complete heaven for a birdwatcher.

It is the only wildlife sanctuary of Delhi, located on the southern ridge and the northern terminal of Aravalli hill range (oldest mountain range of the country). Back at 1900, this area had aplenty of Lion, Leopard and Chinkara. Over 190 bird species, 80 species of butterfly, many mammals such as Nilgai, Blackbuck, Jackals, Jungle Cat, Civet cat and Porcupine have also been reported.
It is highly advised one must not go here all alone for safety reasons. I am a sole witness to one such incident, therefore, I would highly recommend visiting the park with complete care and safety, since, and lots of dangerous incidents have taken place.