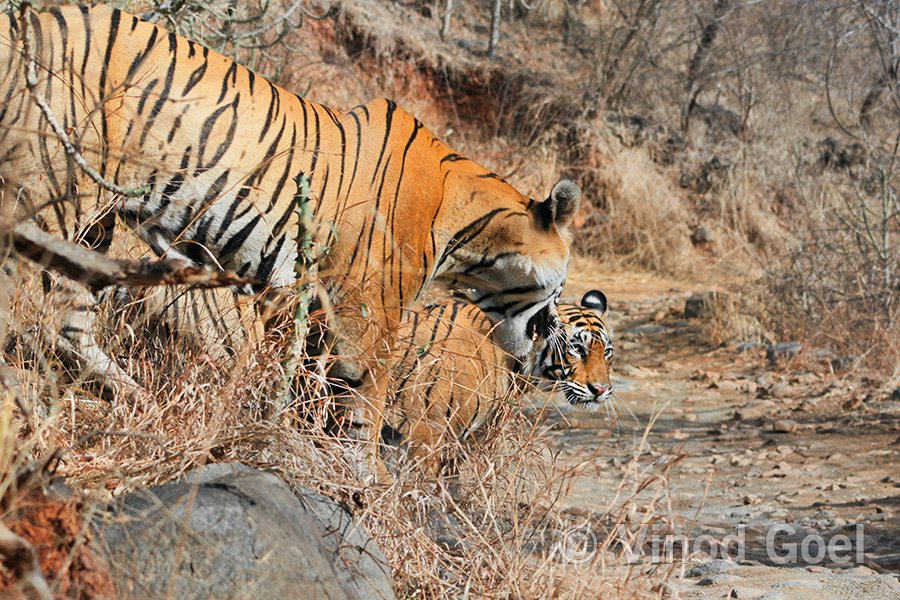 I remember vividly while in the park we came to know about the sighting of a tiger in Zone number 2 at Nalghati in the morning of 25th May 2009. By the time our vehicles reached the spot there were already more than 20 vehicles. Although the tigress was sitting on the road but we could see it only when it stood up as there were other safari gypsies in front of us and the route being narrow as well as on our left was a deep valley and on or right was an upward hilly. When the tigress moved to the hill and melted into the under growth, all the vehicles in front of us including the canter which had hindered our view moved away to different parts of the park and our vehicles were left at the site. We were trying to understand the earlier situation about the sighting from Sh Balendu Ji owner of Dev Vilas Resort… It was learned that Male dominant tiger T 28 had gone to scare away another male tiger (likely T 24) from the scene.

While we were waiting under the GULAR tree suddenly we observed a male tiger emerging from the valley end, who paused for a while, crossed the main route and climbed up the small hill. It passed through the dhok trees and the bushes and was on the move. However when .However when it approached the main route, i was surprised to see both the male and the female moving together, female a step ahead than the male. This was the first look when we saw both of them together looking at each other. A memorable sighting for us. In fact it was only myself and my son Bharat Goel who could see the whole movement. Other two vehicles behind us could hardly see as they were obscured by our vehicle in the front at the slope in the Nalghati. Even after 10 years I am not able to forget my first courtship of tigers of course. Later on they dominated the Prime Zone 3 of the Park for quite some time.

The image recorded on 25th May 2009 remind me of a famous and emotional song from the Hindi Movie Thakur Jarnail Singh (1966 ) given below.

The image from the Ranthambhore Tiger Reserve in the State of Rajasthan taken on 25th May 2009.