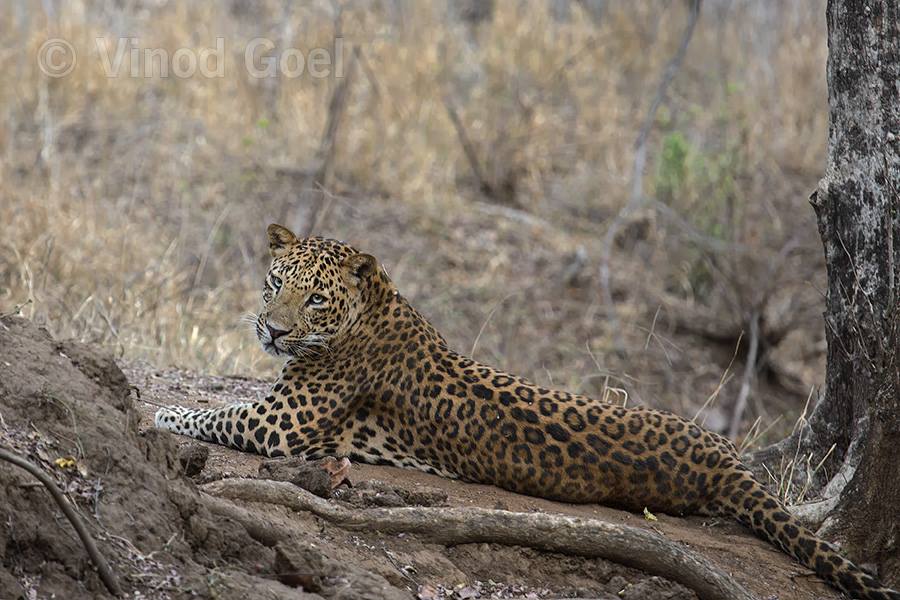 Nature lovers visit Ranthambore Tiger Reserve in the State of Rajasthan to have glimpses of the TIGER. However this time apart from tigers I had good time with the rarity of this park namely leopards.

In the evening of 11th May 2017 my first game drive , observed a leopard enjoying the well earned meal of spotted deer about 50 meters from the main route in zone no 2.

In most part of the world there is a practice of putting black dot on the face of the child and even on the body part of grown ups to ward off the people from the evil eyes.

In the morning the nature played this role by showing us a sloth bear in the early hours of the game safari even before entering the main gate of the safari route.

In search of main resident tiger T 57 we reached the Tuti ka Nala and found a leopard sitting comfortably on the raised platform. It kept on observing us and did not show any sign of discomfort by our presence. For 10 minutes it kept on sitting. There after it moved up on the hill and melted into the forest.

Not much far from the earlier location ,after 10 minutes we observed another leopard relaxing under a tree not far from the safari route. Another big surprise as I had never seen a leopard in such a relaxed mood. Being a very shy animal it always tries to move away from the human beings.

After about 20 minutes it got up and rubbed his cheek against the trunk of the resting tree and subsequently urine sprayed the trunk. It moved leisurely up on the hill. On its move, langur monkey alerted the other denizens of the forest by their alarm calls. The spotted dear who were not far on observing the leopard gave the calls. The silence of the jungle was at stake. But as he appeared not hungry, probably to have more water ,he kept on moving up on the hill. The alarm call died after some time and we moved ahead in search of a bigger cat Tiger.

Two leopards in a span of hardly 30 minutes. What a luck !

For the first time I had such a wonderful sighting of leopards whereby we observed 3 of them during back to back 2 safaris.

I am sure you would love to see the images .