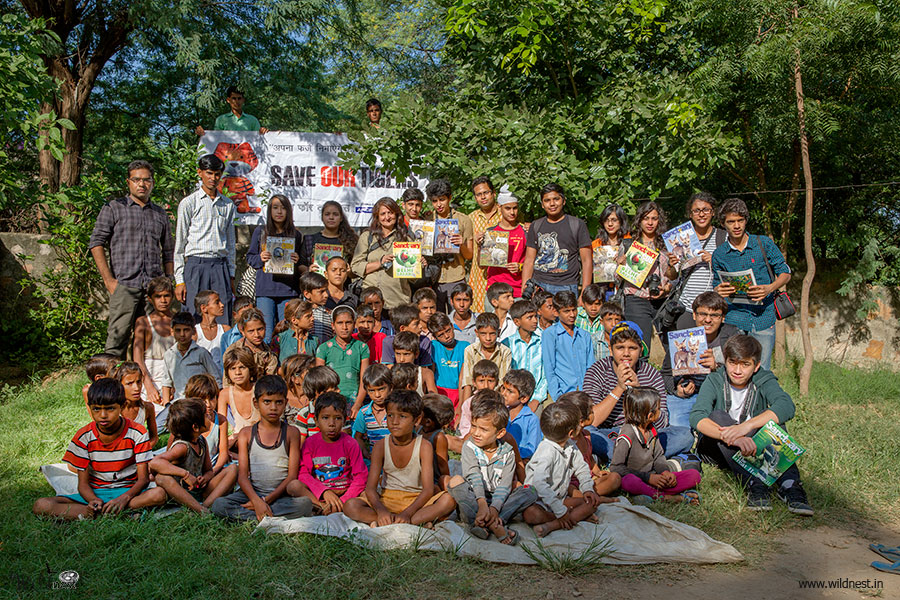 It is not often that you get yourself an opportunity to escape the monotony of city life and spend
some time among lush green forests in the company of tigers. Ranthambore national park, what a spectacular place. A jungle which has so much to offer. One
finds themselves transported back in time, roaming around the ruins of the fort, passing through
elaborate gateways, around which nature has beautifully adapted itself, and spotting small ruins
scattered all over the park-which somehow manage to fit very well with the way of this forest. Armed with the camera and our shoe laces tightened up our journey began. After a drizzle of
history about the Ranthambore fort and climbing up the enormous fortress, we had ourselves an
incredible view of the famous lakes padam talao and Rajbagh talao. The further we went, we got
to see various parts of the once-abode of the royalty and a temple which receives the very first
invitation of any auspicious event in it’s believers life (it literally has a letter box placed outside!)
and the evening coming to an end with an ever so spectacular sunset veiled by a cloud creating
a halo effect. The jungle seems to reward your sincerity in its own unique way. For some it could be spotting a
rare bird, a rare animal or even a rare moment with the ordinary. On the second safari, we found
ourselves in the company of a mother tigress, Krishna with 3 cubs. Even amidst a very excited
and loud group of tourist, they seemed quite at home-leisurely crossing the road, resting under
the tree’s shade, hopping over tiny puddles of water and playfully interacting with each other was
something this tiger family blessed us with. Running late, although it broke our heart a little
but we bade them goodbye. This was to become our only tiger sighting over the course of our 4 day trip, nevertheless, it was
something unforgettable for each one. We were also graced by the presence of treepies,
vultures, honey buzzards, kingfishers, owlets, storks, terns, lapwings, ibis, serpent eagles, nilgai,
langurs leaping from one tree to another overhead (which was a little unnerving, to be honest)
and a satisfying amount of deer; spotted and sambhar. Each day was a fresh start, everyday was a challenge, each moment was an opportunity to
hone one’s skill at photography. The jungle has a certain charm to itself- it makes you imbibe
certain values, it changes you, you can never be the same once you’ve truly had a taste of pure
wilderness. We were fortunate enough to visit a small village in the vicinity of the forest. Here the children
study under the watchful eyes of the peacocks. It was clear that this area is constantly and
lovingly being supported by the ‘save the tiger’ family. The children here took us by surprise, they
seemed to be sensitized about the issues relating to the royal cat rather well. One child even
took to explaining to us about how even if the tiger destroyed the crops- it shouldn’t be met with cruelty. They put up a little show for us- recited poems. And it was here that we met a young fellow from the village- living his dream, Govardhan bhaiya. Says that he fell in love with the tiger even before he saw one, he now works with the local children and makes conservational efforts with support from ‘save the tiger’ organization. And says that he loves his job. We visited a small shop called ‘Dhok’ named after the most abundant species of tree found in Ranthambore forest. Dhok was initiated to create alternate source of revenue for the Moghlai community (poachers). We also got to design our own T-shirts using block prints. The trip had the most delightful ending, after our very last safari- we had the greatest luck of meeting Mr Valmik Thapar. This name is bound to come up, should you ever find yourself watching a documentary on Ranthambore or have a conversation with a wildlife conservationist or simply come across one of the various books that he has written on Ranthambore’s tigers. There he was- standing at the end of a room, now an interpretation center inside the forest, with light flooding in from windows all around. With an unkept beard and a rather intimidating aura this man is truly a gem. Having studied the tigers of Ranthambore for years, it is always a pleasure to hear him speak.

“At last I saw it. The unmistakable glow of the striped coat; the powerful, unhurried, silent walk. It
was my first tiger, confidently strolling down the middle of the road. The power and pure beauty
of that moment cast a spell which was to become a driving passion in my life in the months and
years ahead.”
-Valmik Thapar

In retrospection, I think this explains my feelings at the sight of my first tiger at Tadoba too!
Without fail, I must remember to appreciate Deepika ma’am’s zeal, Himansh sir’s birding
expertise and Bharat sir’s constant guidance and the sight of him pulling out his humongous
600m lens is simply unforgettable.