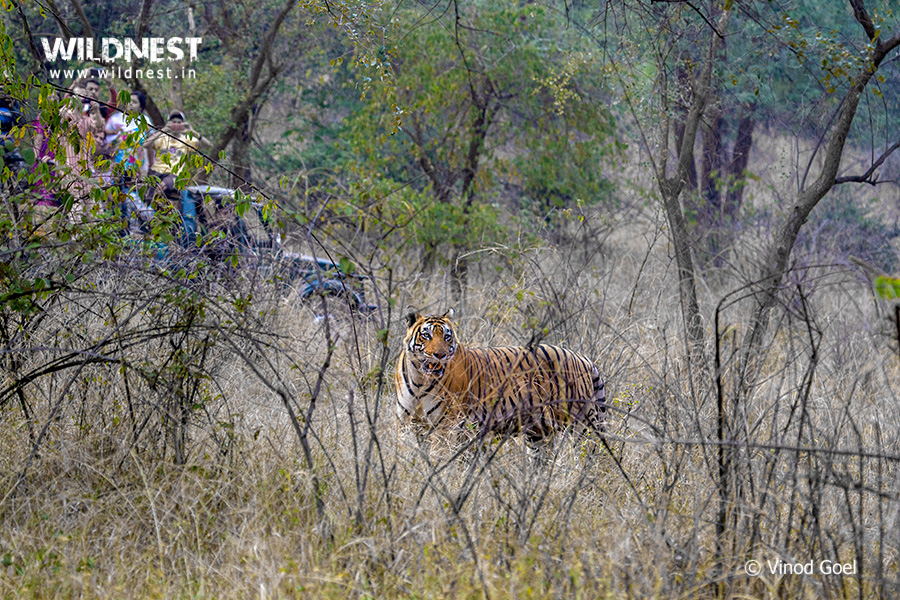 In spite of hearing lot about Sariska Tiger Reserve, reading many articles & book references since my childhood, I could make my first trip as late as in the year of 2000, when I had no idea about wildlife and had no plans to become a full time wildlife photographer… but now I realize that my destiny was locked to become one… Wild Life Photographer & Writer and will make trips after trips to this place known for elusive Tigers.

It was 25th May, 2011, almost a decade later, when I have turned into a full-fledged wildlife photographer and writer despite holding the crucial post of Commissioner of Customs, Airport & Aircargo, New Delhi, I got the golden opportunity to visit Sariska and stay put there for a day. I saw a male Tiger ST6 in the late evening near the forest Chowki  Slopka. My love affair with Sariska continued. I visited Sariska with my entire family to celebrate New Year eve – 2013.  On the 1st January, 2013 early morning, we had glimpses of Tigress ST3 while crossing the road in the temperature of minus (-)3 degree centigrade.  Again in November, 2013 we encountered ST6 after a long time, when it allowed us to click memorable shots while moving towards our vehicle and marking the trees with its urine as well as with its paws. Last year, in 2014, Sariska revealed a secret, which every wildlifer would love to click… in the afternoon safari in the Brahmanand area, I was clicking  a female Sambar feeding milk to its Fawn & a male Sambar came forward and pressed his mouth between the hind legs to suck milk. It was unique and eye opener for us. when I discussed this with famous wild life film maker Nallamathu and Dr K Shankar from Wildlife Institute of India, Dehradun, both of them were  surprised & even were not ready to believe unless until I shared the photographs. Even Dr  Faiyaz  Khudsar, scientist from Yamuna Biodiversity Park, Delhi too was surprised & termed it a rare event in the natural history.

Since, I had been devoting my entire time, money & energy in wildlife photography & writing since my retirement on 31st January, 2015, I thought of visiting the Park at the end of June this year before it is closed down for the rains. It may be worth mentioning that Sariska & many of other parks close down for tourists from 1st July on account of rains every year.

This time my itinerary was prepared by the team of Wildnest  Travel & Photography, owned by my son Bharat & my nephew Ankit, who have left their respective highly paid software jobs to launch the startup. In fact, Bharat accompanied me to Sariska  as he and his team members do with their other clients. We stayed at Sariska Tiger Heaven property earlier owned by Dinesh Durani, founder of Sariska Tiger Foundation, now leased to M/S Sterling Resorts. It was a pleasant stay. Although I was very keen on clicking Peafowls because of the fact that Sariska has the largest population of Peafowls not only in India, but on the entire planet. But, my guide Puran strongly insisted to go in search for a Tiger as we could not see any Tiger in 3 previous safaris. He had already zeroed down to two most probable locations as well. Based on information of Puran and Bharat’s sources, we proceeded to Kundali Anicut on 29th June during the afternoon safari, where a tourist had already spotted Tigress ST2 with grown up cubs in the same afternoon. By the time we reached the spot, the entire Tiger family had moved from the waterbody. We could see the Tigress climbing the hill & I was lucky to photograph the mother as soon as it stopped to look at us. Later, we could see the cubs also as they were moving separately. We saw the entire family together, but could click the mother only.

This was my first sighting of a Tiger family in Sariska in 15 years. No doubt Sariska had lost almost all the Tigers due to illegal poaching mastermind by Sansar Chand and gang, but the good news is that it is trying to regain its place again.

At present, there are 13 Tigers in the park and the Tiger population is bound to increase provided they are not poached. The population of Tigers is not increasing with the same pace matching another famous Park – Panna Tiger Reserve in Madhya Pradesh due to – problem in relocating number of villages outside the park, passing of a highway through the park.

Normally, poaching rate is higher when the park is closed for the rains for a period of three months. In the rest of nine months, guides, drivers, tourists & wild life lovers keep the park busy and leaves no room for the poachers, while there  are ample room for the poachers during the closed days.

I do suggest, the State Government should think of creating a buffer zone out of the total area of about 1300 sq km and that could be opened to the tourists throughout the year. This would not only reduce poaching, but also give ample employment for the people nearby…and keep our love affair with the park intact for years to come…

Click here to read more about Sariska Tiger Resrve, How to reach Sariska and other details